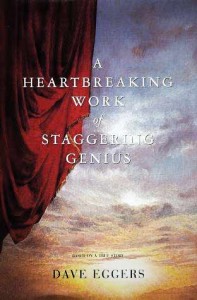 I hate it when people buy me books for the holidays. I’m a firm believer that certain books enter into our lives at exactly the right moments, and if a well-meaning gift-giver were to intervene with the latest Nicholas Sparks novel swathed in sparkly snowflake paper, it would throw off my literary karma. I prefer to find books myself, or more precisely, I like to let them find me.

I had a serendipitous encounter with Dave Eggers’ A Heartbreaking Work of Staggering Genius a few weeks ago, and now, having consumed the fictionalized memoir in a three-day reading binge, I realize the timing counted just as much as the book itself.

I’m not talking about everyday encounters of the literary kind — chancing upon books prominently displayed on bestseller shelves or those recommended on Amazon. I’m referring to literary trysts that feel orchestrated by a well-read matchmaker from above. You see the book somewhere random — the subway, a friend’s bookshelf — and it’s like locking eyes with a mysterious stranger across the room. You just know the reading experience will be torrid and intense. It’s not just that it’s a good book. You and the text have incredible timing.

I know I’m a decade late to the Dave Eggers party.  I planned on reading AHWOSG when it first came out, but the bar was set too high.  It was too obvious. Too popular.  Too blatantly tugging at the heartstrings. It hadn’t been around long enough to withstand the test of time. Plus, an ex-boyfriend thought it was amazing, and that pushed me over the edge. I thought my ex sounded like a pompous blowhard describing how he identified with the protagonist’s struggles. With a title like that, the author was probably a pompous blowhard, too.

Fast-forward ten years, when I’d become of a fan of The Believer but all but forgotten about AHWOSG. I was walking out of an indie bookstore, where I’d been writing, when I spotted the book on the one-dollar rack. I bought it. The purchase occurred in the midst of post-writing self-doubt:  What am I doing? Who is going to care what I have to say? Even if I’m aware of how my background and life experiences shape my writing voice, does that make it any less banal? And even if I’m aware of my self-conscious attempt not to write myself into stereotypes, it would be disingenuous to pretend to be something I’m not if I do fit a certain mold. These doubts stemmed from a deep-seated fear:  How could I write fiction and make it feel real when my own life somehow seems fraudulent? I went home and assuaged my worries with reading, and quickly realized why the book had put me off a decade ago: Eggers sounded like I felt.

From the prologue of AHWOSG:

C.2) THE KNOWINGNESS ABOUT THE BOOK’S SELF-CONSCIOUS ASPECT

Here was Eggers incorporating all the questions I’d asked myself about my own writing process before he even started his story. He wasn’t hiding the inferiority and superiority complexes that make writers think their work is simultaneously garbage and genius.  He was calling attention to this bipolar mentality, declaring that yes, his self-referential self-consciousness was actually self-aggrandizement masked as self-deprecation.  Now we couldn’t dislike his work. He’d outfoxed his reader. In the prologue! How could he do that? It felt like cheating.  Eggers had taken my (and his too) overly self-aware and critical gaze and incorporated it into his book. Rather than surrender, he let his freak flag fly.

I continued reading. I was almost embarrassed to be privy to his stream of consciousness purge on the page.  The story spread out like runny undercooked eggs, but instead of losing my appetite for the book, I soaked it up. In fact, I sopped up every last bit of whatever pain, heartbreak, frustration, joy and hope Eggers had to offer.  By the end, I was pissed. How dare he reel me in and hook me with a story he admitted he didn’t know how to tell  — a self-absorbed, angry and guilt-ridden yet highly passionate, skilled and insightful story? Who wanted to read a self-conscious sob story anyway?

I did. I really, really did. But more than that, I realized it was the kind of story I was trying to tell.

Reading is an inherently narcissist act: we love to see ourselves reflected on the page. It’s comforting, and sometimes even enlightening. But then there’s the rare book that resonates so deeply it’s jarring, sort of like hearing your own voice on an answering machine for the first time. It’s the type of book that makes you aware of the chasm between the way you see yourself and the way the rest of the world sees you. AHWOSG made me extremely uncomfortable. The parts I loved about the book were similar the parts I hated about myself. I realized the only way I could tell a story —even a fictional one — that felt honest was not to smooth over the rough edges. The rough edges were the story.

To be totally honest, I’m not sure whether books come into our lives at the right moments, or whether the moment automatically becomes right through the act of reading. I do know that Eggers’ book came at a moment when I was having a crisis of writing confidence. It echoed my experience in a way it couldn’t have ten years ago. I know had I read the book when it first came out, before moving from a Chicago suburb not far from where Eggers grew up to California, before becoming a writer, before losing my own father to cancer, before being in love, and before coming back home to Chicago again, the life of the book would not have paralleled my own in such an uncanny and illuminating way.

Perhaps I would’ve enjoyed the book for different yet equally important reasons ten years ago. Or maybe I would’ve written Eggers off. It doesn’t matter. A book can be meant to be more than once. Maybe I’ll read it again ten years from now, or maybe I’ll give it someone else and pass along my literary karma.

Alizah Salario is a freelance writer/reporter who has written for the Huffington Post, the Daily Beast, and more. Check out more of her work at www.alizahsalario.com.

Is Alcohol Good for Your Health?